Human Alienation and the Future of Robotics

Can this not be the ultimate result of research into robotics?  Haptics (see Haptic perception ,  Haptic technology), you may know, is the feedback you get when a keyboard clicks or when you pick up a coin.  Taiwan and Japan are making great advances in robotics, haptics, and intelligent algorithms that might make a robot sigh in response to the right stimulus – or make you sigh. 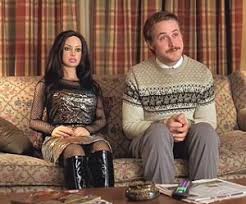 Lars and the Real Girl

The  anthropology department of Ambergris College, in recognition of rapid advances in robotics and haptics, will be offering a new course: “Introduction to  Anticipatory Anthropology.”

The field of anticipatory anthropology, while new, addresses future human behavior in society.  The proposed course is in response to recent advances in Asia in the development of robots that appear human, are able to communicate phrases that approach the level of human interaction in the fashion of HAL in the film, 2001.  Future androids and gyndroids enhanced by intelligent algorithms enabling response to human facial expressions, voiced emotions, and touch.  While the research will take three to five years to reach a commercially viable level of sophistication, it is time to think about human-machine interaction at a different level.

Many people in society exist in barren environments with little stimulation except for a domestic pet and television – they are, in effect, abandoned by the larger society by age or disability.  While the benefit to the human condition of having a companion animal can’t be denied, the benefit from having a near-human companion that can share emotions and interests is obvious.  We believe the use of surrogates are an unavoidable consequence of this alienation.

Certainly, there are many foreseeable complications that might develop.  There are dangers of transference when a vulnerable person becomes dependent on a machine no matter how well the emulant performs its task.  Sexuality is an obvious consideration as seen in the Gillespie’s recent 2007 film Lars and the Real Girl.  It has been reported that relations with simulants is, if not common, at least not unknown.  For further information contact Ambergris.edu

I'm a curious person, of reasonable intellect, "on the beach" (retired) and enjoying my interest in anthropology, language, civil rights, and a few other areas. I've been a hippie/student/aerospace tech writer in the '60s, a witness to the Portuguese revolution in the ‘70s, a defense test engineer and witness to the Guatemalan genocide in the '80s, and a network engineer for an ISP in the '90s. Now I’m a student and commentator until my time is up. I've spent time under the spell of the Mesoamerican pyramids and the sweet sound of the Portuguese language. I've lived in Europe, traveled in Brazil, Central America, Iceland, New Zealand, and other places. My preferred mode of travel is with a backpack and I eat (almost) anything local. Somehow, many of the countries I have been to have had civil unrest (for which I was not responsible). I'm open to correspond with anyone who might share my liberal, humanist interests. I live in San Buenaventura, California.
View all posts by carlos →
This entry was posted in Humor, Sex and tagged anthropology, haptics, human relations, psychology, robots, sex. Bookmark the permalink.

2 Responses to Human Alienation and the Future of Robotics